A Minories of my own – 7 – and the first board built

Posted on January 14, 2021 by snitchthebudgie

Over the last few days, lockdown has enabled me to carry on working on the layout.  Having marked up and cut out a lot of plywood, I ended up with a kit of parts for the main board.  Looks a bit like one of those commercial laser cut boards, as in the background, but without the accuracy!

I slowly and carefully glued and pinned (in places) the bits together to build the shadow box of the main board.  Stiffening was added to the underside, using a diagonal pattern rather than the more usual cross-pieces.  This should be more rigid, and is made easier – and indeed possible – as I haven’t got to dodge the point motors under the board. 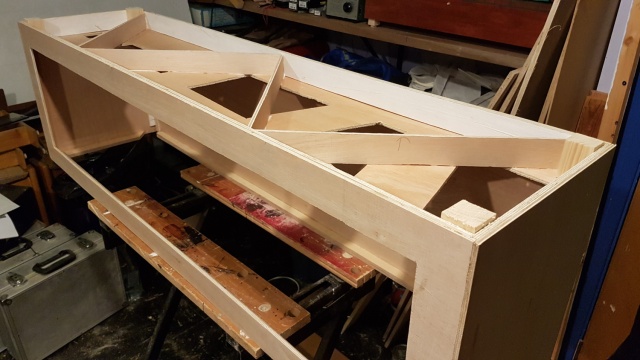 Back the right way up, I’ve added the spacers between the two board scenic levels.  On the left are the two roads under the station, Waterloo style.

And with a coat of primer inside (pretty rough, but it will be covered in due course) and varnish outside.  Just a tin of dark mahogany varnish that was lying around, but it brings up the plywood nicely.

Having placed, but not fixed, the upper board in place, I fished a few trains out of their blue plastic boxes to get an idea of what the finished article might look like.

Not bad!  Next job will be cut the holes in the ends of the board for connection to the next baseboards.  I may also get the sky backscene in place.  Then tracklaying?

Setting this up has brought up a few thoughts and problems.  Once again I muttered about the silly idea of putting the station on a raised section.  It occurred to me that I need to get some scenery on those roads under the station before I fix the top board down.  So there will be a little pause whilst I work out how to do the road and bridges for this section.  And I suppose those long road ‘tunnels’ ought to have lights, too.

The other question is whether to lay the Finetrax track in situ, or build it off the layout and then install it.  Although the latter would be easier, the number of adjacent points on the layout suggests that it would be better to build them in a single unit.  The solution is actually simple (for once).  I’m going to split the upper board in two, so that all the pointwork is on the right-hand, 750mm, section.  This is a small enough size to be worked on off the layout, completed, then fixed in place.  Splitting the board will also make fitting the upper board in place easier.

We’ll see what happens next…..