Posted on February 2, 2021 by snitchthebudgie

The central heating has been playing up, so that’s been a great excuse to spend more time in the loft, with an efficient electric fire, and King Crimson streamed loudly to work by.  I’ve been working with Plasticard to build some scenery for the layout.  I took out a box file of plastic, and one bag of bits produced a local letter to me in Hong Kong, dated 1985.  Some of this plastic goes back a long way, so perhaps I haven’t been using it enough!

What I may have learnt over the years is not to be shy of throwing bits away if they don’t come out quite right.  I’ve done this a couple of times with the bridges that I’m building.  I think in the olden days I’d have bodged it (not saying that I don’t bodge it now….)

Never mind the covid, it’s my memory that worries me.  I took the plunge and ordered a couple of EFE Shark ballast brake vans over the internet.  The following day, I received another email from another well known box shifter saying that my order had been posted.  Seems like I also order two Sharks in November.  Never mind, I’m sure they’ll find a home somewhere!

I’m wondering whether I can get away with this on the new layout?

The period is a bit early for me, and the location not quite right (this is the Strand), but it would certainly make a talking point.  A few sheep are still herded over London Bridge into the City annually, to commemorate and maintain ancient rights, but this has become a day out for a few celebrities (plus a few sheep) rather than a lawnmowing exercise.  I’m sorely tempted…..

I love this picture.  Railway station catering at Waterloo in the 1930’s.  Someone commented that this item of rolling stock wasn’t withdrawn till the mid-1960’s.  I could believe that, but I bet the cakes didn’t sell for 3p then. 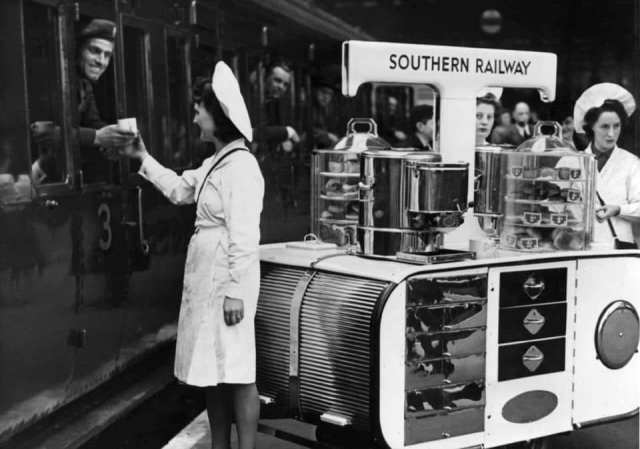 A great video of the Britannia pacifics.  Note the shot of the Bullied pacific slipping like mad as it leaves the station.

Stay safe everyone! (And do mask up….)