Posted on December 30, 2016 by snitchthebudgie

A present to myself this Christmas was this little book….

Between 1909 and 1929 there was an overhead electric commuter service on parts of the London Brighton and South Coast Railway.  It didn’t get as far as Redhill – we weren’t commuter land in those days, only getting as far south as Coulsdon North.  If the Southern Railway hadn’t decided to opt for the LSWR 3rd rail system – on the grounds of cost and speed of construction – perhaps overhead lines through Redhill and down to Brighton would have followed in the 1930’s.

The book is an interesting read, most of it being photographs of the construction, with a few of the trains to complete the picture.  This is my favourite, as a civil engineer, as Health and Safety hasn’t quite been implemented…..

I also like the photographs where the contractors are identified by their hats.  No hard hats, but cloth caps for the workers, and bowler hats for the supervisors.  As can be seen above, the photographs are also full of details of the right of way in the early 20th century.  Other photos have useful views of tunnel mouths and retaining walls.  All good for the urban railway modeller.

Finally, a delightful item of rolling stock, built by the Southern Railway for the Wallington services.  These ‘milk vans’ had a very short operating life, but when the overhead came down were converted into bogie brake vans, the precursor of the better known ‘Queen Mary’ brakes.  They were also ahead of their time, working as push-pull units, usually with coaches and a driving trailer either side of the locomotive.  I don’t think electric push pulls were seen again on Southern rails until the Gatwick express.  (Not counting 4-TC’s with REP electrics or Class 33’s, as neither had a single electric locomotive.) 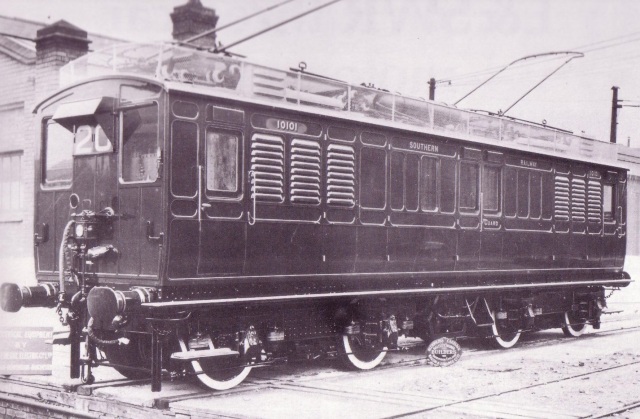 This would make an interesting and very different commuter belt layout.  Has it been done?  I recall seeing models in the past, but nothing in recent years.