Well, we’ve survived another annual exhibition!  A lot of hard work, but well worth it.  All went well, we had some good modelling on display, and received a number of very positive comments from the punters – not least about the real coffee on sale in the refreshment area!

But work started on the Friday afternoon, collecting things from the club room about 1pm, then slowly working to put the N-mod/N-club circuit together.  Ideally, one should have a trial run of the layout to be exhibited, to make sure all is working.  However life has been just too hectic, so a long afternoon to allow for a few repairs and rewiring is a good substitute.   And there’s time for coffee breaks and a fish-and-chip supper. 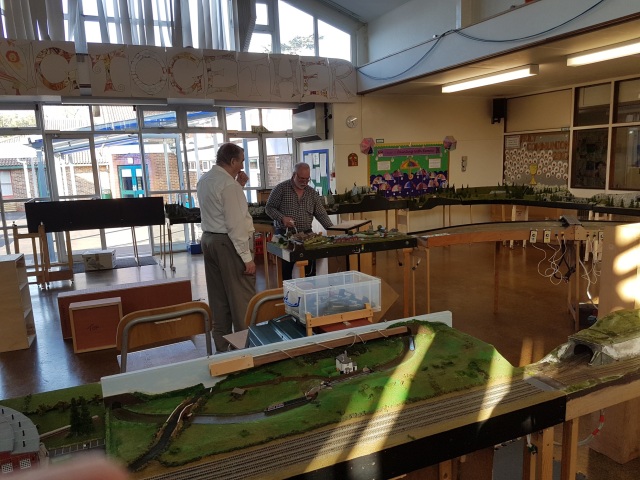 In another room, Paul was piecing together all his Kato Unitrack for the Kato Racetrack….

Saturday morning, 10am, all was working (just) and the doors opened to our visitors.  It was a strange year, in that there was a very high attendance in the morning (I was wondering about a record year), but a very quiet afternoon without the usual ‘surge’ after lunch.  Perhaps the fine weather and the Grand National kept people away.

However, to get in you have to pass the ‘gate-keepers’, experts in giving the wrong change and insulting the visitors.  For some reason, they seem to love it!  Here, Graham and Reg look ready to confuse all comers…..

Still, the hall is pretty busy, so a few hardy souls have made it past the pay-desk. 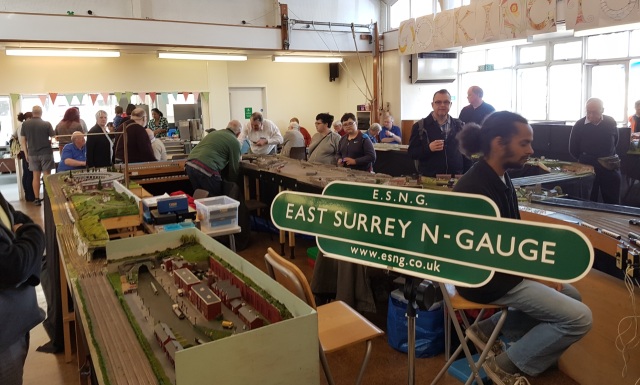 The fiddle yard has the usual variety of stock/  We were initially aiming for a UK themed day, but Simon, Graham and I have set up a few American rakes. 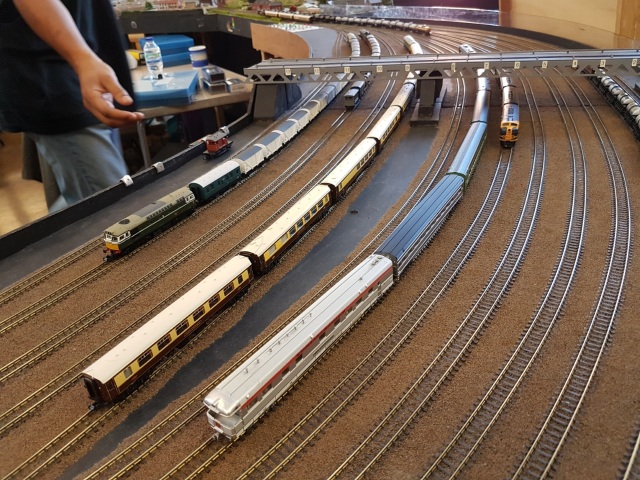 On the N-mod circuit, our late President’s ‘Lowwater Basin’ diorama was behind the main lines, though it looks as though a little repair is needed to one roof.

One new idea for the modular layout this year was the addition of a double track N-club standards branch off the main N-mod circuit (we’ve done it once before.)  Here we have one of the junctions on Derek’s module, whilst Simons long American tanker train passes on the main line.

Derek’s N-club corner hosts a preservation society, who seem to have preserved some old ‘Lone-Star’ track to build their yard.  That Derek recycles everything….

After going to Stuttgart and back unused, I was pleased to see that my ‘Clubhouse’ N-club module saw trains running over it, and worked fine.  I’ve got all the figures and vehicles to place on the scene, but just haven’t had time to set it up. 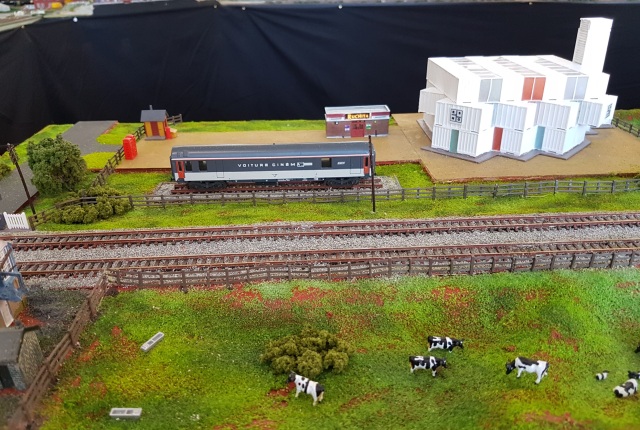 Trade in the main hall included Invicta, that was a real family business for the day….

And NScaleCH.  No John guarding his stand, as he was keeping Alpenbahn running.